Vattenfall to sell 49.5% of the offshore wind farm Hollandse Kust Zuid to Basf

According to a contract signed by Basf and Vattenfal, the 49.5% of Vattenfall’s wind farm Hollandse Kust Zuid (HKZ) will be purchased by Basf. The purchase price amounts to 0.3 billion euros and takes into account the achieved status of the project. Including Basf’s contribution to fund the wind farm construction, Basf’s total commitment amounts to around 1.6 billion euros. Closing of the transaction is expected in the fourth quarter of 2021, subject to the approval of the relevant authorities. Offshore construction of the wind farm will start in July 2021.

Once fully operational, the wind farm will be the largest offshore wind farm in the world with 140 wind turbines and a total installed capacity of 1.5 Gigawatt. The Hollandse Kust Zuid wind farm will also be the first fully merchant offshore wind farm in the world which does not receive any price subsidies for the power produced. The project is expected to become fully operational in 2023. A significant part of the electricity production of HKZ is reserved for Vattenfall’s Dutch customers.

Basf is acquiring the electricity from the wind farm for its ownership share through a long-term power purchase agreement. It will enable Basf to implement innovative, low-emission technologies at several of its production sites in Europe. Basf’s Antwerp Verbund site will benefit from the renewable power to a significant extent. The Basf Antwerp site is the largest chemical production site in Belgium and the second largest Basf Group site worldwide.

The supply scheme to other Basf sites in Europe will depend on the further development of the respective regulation for renewable energy. The wind farm will also support the Netherlands in reaching its target share of renewable power generation and greenhouse gas reduction targets. Basf has more than 1,500 employees in the Netherlands who develop, produce and sell products for many sectors at various locations.

Basf aims to reduce its greenhouse gas emissions by 25% by the year 2030 and achieve net-zero emissions by 2050. One important lever to further bring down emissions is replacing fossil-based electricity with fossil-free electricity. Basf will secure the required amounts of renewable power through a “make and buy” approach. This includes the intention to bring in financial co-investors to this project allowing for an efficient use of capital. 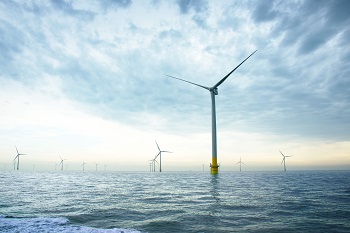 Basf is working on scaling up low-emission technologies to industrial dimensions. Beyond 2030, Basf expects to implement technologies such as CO2-free methods for the production of hydrogen and electrically heated steam crackers, which will significantly increase Basf’s demand of renewable power. Steam crackers play a central role in the production of basic chemicals and require a significant amount of energy to break down hydrocarbons under high temperatures and pressure into olefins and aromatics. Offshore wind farms can play a key role to supply the required amounts of renewable energy.