Plast 2023: many opportunities for interaction with operators from all over the world

Plast - International Exhibition for the Plastics and Rubber Industry runs from Tuesday to Friday, 5-8 September 2023 at the Fiera Milano fairgrounds in Rho-Pero (Milan). There are more than 700 direct exhibitors already registered for the event, with over 36.000 square metres reserved, figures that support the repute of the fair as a venue for a rich selection of innovative products and services thanks to businesses and professionals from all the geographical areas.

The 2023 edition of Plast thus proves to be a success from the onset, with the added features of the three satellite fairs, each dedicated to an area of excellence in the sector, i.e., Rubber, 3D Plast and Plast-Mat, demonstrating the dynamism of a market that expresses extremely positive values. The core of the exhibition is the section with machinery, auxiliary equipment, and plastics and rubber moulds, an important sector in Italian manufacturing with over 400 companies.

The trade association Amaplast’s Mecs Statistical Studies Centre foresees a substantially positive balance for this sector again in 2022 - after the rebound recorded in 2021, a year ending with double-digit growth in all indicators - demonstrating the ability of the sector to absorb the impacts of the perturbations that have occurred and been compounded over the past three years. Overall production for 2022 is expected to reach the threshold of 4.5 billion euros, with growth of one percentage point over 2021: while not in itself eye-popping, it consolidates the recovery achieved during the previous year, even exceeding by two points the pre-pandemic levels of 2019.

Growth, although tempered, is recorded in both components of demand: exports (which represent roughly 70% of production) show growth of approximately 2%, again exceeding 3 billion euros; the domestic market registers a +1%, partly influenced by a 5% increase in imports.

As regards exports by region, according to Istat data for the first nine months of 2022, flows have intensified to Asian markets, the Americas (South America in particular), and Europe (especially extra-EU states, excluding the CIS for obvious reasons). On the other hand, flows to Africa have diminished, both to Mediterranean and Sub-Saharan markets.

Leading eastern markets is India with a robust +34% consolidating the progress recorded in recent years. The importance of the India market for Italian companies was clearly demonstrated by the high number of participants in the Italian pavilion at the recent Plastindia in New Delhi from 1 to 5 February. 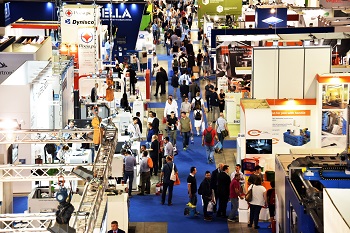 On the other hand, there has been a slight downturn in sales to the Chinese market (-5%), which is the third largest export market for Italian companies in the sector. The causes are to be attributed to persisting uncertainty associated with Covid policy, which has put the brakes on the Asian giant’s economy. This could affect participation at the specialized Chinaplas (Shenzhen, 17-20 April), which historically has witnessed the direct presence of at least fifty Italian exhibitors coordinated by the trade association Amaplast.

Other important Far Eastern markets such as Vietnam, South Korea, and Japan show double-digit growth in imports from Italy, with flows to Indonesia somewhat more intermittent.

In the New World, particularly in South America, the largest market for Italian plastics and rubber processing machinery manufacturers is Brazil and it is not surprising that many will be present in São Paolo on 27-31 March for the Plastico Brasil fair, where the Italian pavilion will be coordinated by ICE-Agenzia and the trade association Amaplast. Supplies of Italian technology to Brazilian processors remained rather static over the course of 2022, although at relatively high levels.

Outstanding, on the other hand, is the performance of sales to Colombia (+254%), making it the number two outlet market in the region, just outstripping Argentina, another historical trade market, where sales showed some sign of recovery (+4%).

In the North American area - which absorbs 16% of sales abroad - Mexico proves to be the brightest market, with a robust +44%, bringing sales by Italian manufacturers back up towards the record levels witnessed in recent years, resolving the downturn recorded in 2020-2021.

On the other hand, exports to the United States show a certain dip (-9%), which may be considered cyclical after a rather long period with a significantly positive trend; the country nevertheless holds its position as second export market of Italian-made plastics and rubber processing machinery. Meanwhile Canada shows a modest growth trend (+4%).

In the European market - which overall absorbs almost 60% of the total - sales performance is good in several key markets such as Germany, the major trade partner for Italian machinery manufacturers (+8%), and Poland (in third place with a significant +23%). Moving down the hierarchy of export destinations, we find good results in Spain (+11%), Austria (+28%), Portugal (+35%), Switzerland (+4%), and Serbia (+145%).

On an opposite trend, supplies to French converters have decreased by 16% and those the United Kingdom by 5%, probably due to repercussions of Brexit.

A particular case is Hungary, a market of a certain importance. After a peak in 2021, sales have returned to the average levels of previous years. 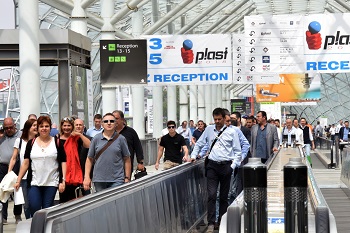 Approximately 4% of Italian exports of plastics and rubber processing machinery goes to Africa and nearly 3% to the Middle East. However, the trends run counter in each area: flows to Africa have slowed, both to Mediterranean countries - mainly as a result of the negative performance of Morocco and Egypt, as opposed to the flat trend in Algeria - and to sub-Saharan markets, where the key South African market has shown an abrupt downturn and the emerging Nigerian market also shows a negative trend.

The Middle East, on the other hand, has given greater satisfaction to Italian manufacturers, with an average +2% in sales, thanks to the good performance in the two principal markets: Saudi Arabia, where operators will gather at the specialized fair Saudi Plastics & Petrochem in Riyadh on 12–15 June, which will feature, as usual, the Italian pavilion; the United Arab Emirates.

Exports to Turkey show little change, while those to Iran – a market that was once of a certain importance – are at a historical low due to the effects of the sanctions.

Poliammide aromatica per pistole a vapore