Over 92% of Italians go shopping at the supermarket with reusable plastic bags and 82% have a positive view of the law, which sanctioned the transition from the use of traditional plastic bags to biodegradable bags, which is considered a step forward for our country in environmental protection. There is similar approval of the initiative of switching to biodegradable bags for fruit and vegetables - an European directive which will take effect by the end of 2018. In this case the initiative met with approval among no less than 87% of the sample, who see the measure as a positive conclusion to the process which began in 2011. These findings come from the survey "The shopping habits of Italians at supermarkets and their attitudes to bioplastics", commissioned by Novamont from Ipsos Public Affairs and presented on January 18 at Marca, the international fair for the private label industry, organised by BolognaFiere in collaboration with Associazione della Distribuzione Moderna (ADM), which took place on January 18-9.

The research is an integrated survey composed of a qualitative study - which involved 40 Italians, including receptive people who are informed about environmental issues - and a quantitative study involving 1,000 CAWI interviews (Computer-Assisted Web Interviews) from a representative sample of the Italian population between the ages of 18 and 65.

When questioned on the topic, Italian respondents showed they were sensitive to environmental topics, with a range of positions which led to the identification of three segments: the so-called “enthusiasts” (27%), namely those who feel actively drawn to the issue in order to further the environmental cause and for whom every individual gesture represents a revolution capable of changing the world; the “institutionalists” (42%) who, while adopting virtuous behaviour in their everyday life, believe that responsibility for finding effective solutions to environmental problems lies with the institutions; and finally the “disappointed” (31%), who believe the environmental battle has been lost and do not pay particular attention to it, particularly in their everyday actions. 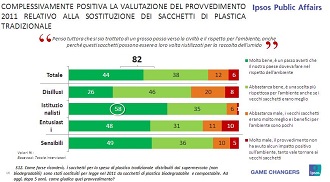 Italians take cloth bags and reusable plastic bags with them when they go to the supermarket. There are many reasons for this, but, in particular, respondents mentioned the greater strength, thickness and capacity of these materials compared with the bags currently distributed at supermarkets, with which respondents were somewhat less satisfied. Regarding the price of compostable plastic bags distributed at supermarkets, the results show that almost half of respondents did not know how much they cost: 19% had no idea and 27% answered incorrectly.

Once shopping is over, plastic bags are put to a wide range of uses, not all of them appropriate (fig. 4). The main use is for lining food waste bins, followed by bins for unsorted waste. The survey also revealed a number of creative and somewhat unorthodox applications such as using the bags for freezing food, a practice which, although relatively uncommon, demonstrates a considerable lack of information. Even more imaginative uses were found for fruit and vegetable bags which, in addition to being used for unsorted and even food waste, were used for clearly mistaken and harmful uses such as for storing food and leftovers in the fridge or for freezing them.

Support for the law that will require fruit and vegetable bags to be biodegradable was at 82% of the total sample, with high points of 97% among institutionalists. The fact that these bags will now incur a charge raised transversal and segmented reactions. For instance, a hard core of respondents objected to the introduction of a charge, including among those who showed most attachment to environmental issues. 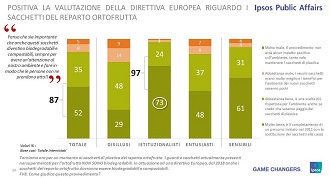 When asked about possible initiatives to support the introduction of the 2018 measure, respondents identified two main players: the institutions and the scientific world on one side, and the points of sale on the other.

It is fundamental to have an authoritative voice that fully supports the initiative, not least to justify the less palatable element of the directive (the legal obligation to introduce a payment) and to remain an impartial presence. However, the style of communication should refer to the specific topic but must not be excessively refined. Simple, direct language is called for to clearly explain the reasons that led to this decision and the objective to be achieved through the new directive. The other central player is the point of sale, which respondents believed should play a leading role in raising awareness among consumers about the initiative (through widespread signage, promoters and educators on site), but also by distributing free samples of bags or through direct promotions at points of sale, thereby reinforcing their role as partners for their customers, including through actions as a part of consumers' everyday lives.

"A key finding emerges from the survey: for consumers, plastic bags, both those for carrying shopping and for fruit and vegetables, are currently a service to all intents and purposes, because their function is not limited solely to transport and because they have values for the environment. Italians are ready for the new directive but want higher quality and more information, and the large-scale retail distribution sector, which has long been sensitive to these demands, will certainly know how to respond". Stated Alessandro Ferlito, Novamont's commercial director.

I compound di Benvic a Icig