On 17 January, the European Parliament adopted its position on the waste shipment regulation. According to a press release of VinylPlus, the text significantly diverges from the European Commission’s proposal on a critical aspect: the rules that apply to waste being shipped within the Union. If it prevails, this position would negatively impact PVC recycling in Europe, undermining the EU industry’s efforts towards circularity.

The European Commission’s original proposal for the Waste Shipment Regulation contained a green list covering non-hazardous plastic waste for intra-EU shipments, in which PVC was included. However, the European Parliament’s position proposes to delete this list and replace it with the Basel convention entry of the types of plastic wastes that are presumed not to be hazardous. The issue is that PVC is not listed in this Basel entry, which means that intra-EU PVC waste movements would become subject to the “Prior Informed Consent” (PIC) procedure.

VinylPlus, the press release stated, is deeply concerned by this proposed change and firmly believes that rules for the shipment of PVC waste inside of the EU must take into account the well-established safe shipment and recycling of PVC within the EU as well as the fact that PVC is recognized by the OECD as a polymer of low concern. 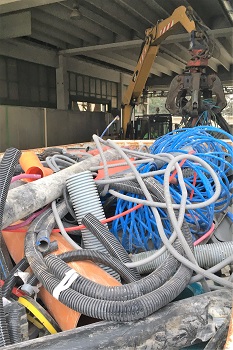 EU Member States and recycling companies have made step changes toward circularity by developing effective PVC recycling schemes in Europe which rely on smooth shipments within the EU, in particular from smaller to larger countries.

In the press release VinylPlus says it supports provisions regulating the export of PVC waste from the EU to non-EU (including non-OECD) countries in line with the Basel Convention. But applying these provisions to PVC waste being shipped within the Union would add unnecessary administrative burdens and costs to the established PVC recycling schemes in Europe and undermine industry recycling efforts without any clear environmental or human health benefits.

The EU well-functioning PVC schemes involve over 150 companies, most of which are SMEs. While PVC has a very low carbon footprint, higher intra-EU shipment costs could translate into less recycling and increased reliance on virgin feedstock. Raw materials extraction and use would, in turn, lead to increased CO2 emissions.

Ahead of the upcoming negotiations between the European Parliament and Member States, the press release concludes, VinylPlus urges EU governments to enable the continued circularity of PVC by ensuring that the intra-EU shipment of PVC waste in the highly regulated internal market benefits from the existing streamlined procedures rather than changing to the Basel convention provisions.