Shareholders approved all the resolutions proposed by the Board of Management and Supervisory Board by the required majority at Covestro Annual General Meeting on April 21, 2022. The actions of Covestro’s Board of Management and Supervisory Board were ratified. As in the past two years, the Annual General Meeting was held virtually and broadcast live on the Internet. In his speech at the beginning of the event Markus Steilemann (left, pictured below), CEO of Covestro, explained the path-breaking foundations that had been laid in the past fiscal year. “We have positioned the company optimally by implementing our new Group strategy “Sustainable Future”. Covestro is becoming more efficient, agile and flexible”, said Steilemann.

The Group presented its new strategy “Sustainable Future” and restructured its organization last year: the three former business units were reorganized into the two segments Performance Materials and Solutions & Specialties. “Our strong fiscal year 2021 provided impressive proof to the fact that our strategy is working and that we are on the right track with our systematic focus on circularity”, added Steilemann. 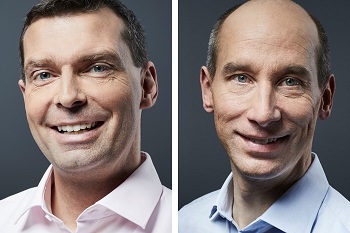 Covestro also announced in March 2022 that it is striving to become climate neutral and achieve net zero emissions by 2035. The Group will make investments between 250 million and 600 million euros to accomplish that. The first major milestone is to be achieved by 2030. The Group plans to cut greenhouse gas emissions from its own production operations (scope 1) and from external energy sources (scope 2) by 60% compared to 2020 levels. Covestro is focusing on three levers on its path toward climate neutrality: more sustainable production processes, renewable electricity and renewable steam. A long-term transition to renewable sources of energies and raw materials is key to reducing dependency on fossil fuels and therefore on gas imports, especially in view of the current geopolitical situation. Covestro’s long-term objective is to reduce greenhouse gas emissions throughout the entire value chain. Consequently, Covestro’s next step will be to publish a target for cutting scope 3 emissions in the coming year.

The Annual General Meeting approved the proposed dividend of 3.40 euros per no-par value share. Before Covestro announced its share buy-back program, that was equivalent to a total distribution of 657 million euros, a figure that has fallen to around 651 million euros since the program was launched. The payout ratio is 40% of the Group’s net income. “That’s the highest dividend in the history of our company”, Thomas Toepfer (right, pictured above), CFO and Labor Director of Covestro, declared.