Working according to circular economy principles is no abstract concept, it is a markedly ecological approach to turning sustainability from theory to an actual call to action to generate profits in a responsible manner, particularly when talking about plastics. Bandera plays a significant role in this process, and from research to production size scale up, “The House Of Extrusion” is a special place dedicated to testing and R&D activities.

On June 21, 22, 23 and 25, Bandera THOE - The House of Extrusion is hosting Bandera Plastic Week, the live digital event to show case Bandera’s latest innovations for the plastics industry. Deeply rooted in the made in Italy concept, Bandera shows an innovative approach aimed at consolidating its role as a trendsetter in the future of extrusion.

The four-day event will host discussions and web seminars focused on current topics and on the introduction of Bandera technologies, featuring several outstanding partners. Circular economy is going to be the main subject and guiding thread of each event, highlighting how innovation will contribute to this virtuous production circle.

Bandera Plastic Week started focussing on blown film, and sheet and foil extrusion lines markets in which Bandera is a consolidated world-leading designing and manufacturing company. On June 21, the event day dedicated to blown film, a Bandera 7-layer Barrierflex extrusion line - intended for processing the most diverse barrier and high barrier film - was in production.  A focus on technically advanced “IoE-Internet of Extrusion”, line supervisor system, was also featured. By the end of the day, the circular economy benefits were introduced, pointing out the reuse of post-industrial materials in film production. 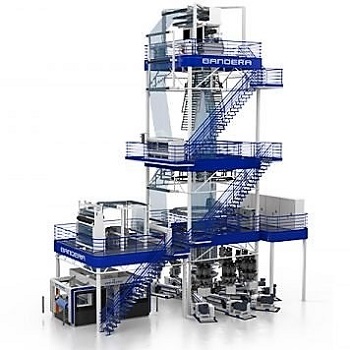 On June 22, another cornerstone of Bandera’s technology was on show, i.e., foil/sheet extrusion lines, focussing on current challenges concerning PET and PP - in particular, in their 100% recycled and 100% recyclable formulas - and highlighting tray-to-tray recycling.

The third event day, June 23, was dedicated to the introduction of the latest Bandera commitment to circular economy, i.e., Revotech, the cutting-edge recycling technology. The entire Bandera machinery range dedicated to bottle to bottle PET recycling of post industrial and post consumer polyolefins was introduced to the event e-participants.

The last event day will feature a seminar to virtually host and involve Bandera’s main partners and suppliers - the leading topic will be the evolution of the plastics market.