20 August 1945, the day graduate engineer Heinz List filed a patent for the principle of the continuous kneader, is regarded as this compounding technology's birthday. Convinced by the concept, Buss inaugurated the first kneader test center in 1948 and delivered the first compounding systems for PVC and polystyrene in 1950, by which time List had become technical director. The company subsequently established this technology globally as the system of choice for producing compounds both efficiently and particularly gently.

To date, Buss has produced over 3,500 of these compounding systems in the form of customer- and application-specific solutions, exporting them to over 80 countries. Applications range from compounding high-performance engineering polymers with temperature- or shear-sensitive components, such as electrically conductive carbon blacks with filler contents as high as over 90%, to the production of formulations for the aluminum, chemicals and food processing industries. Buss's current range of compounding extruders for the plastics and elastomer industry includes the Compeo series which is available in six sizes and is capable of processing up to 12,800 kg/h of thermoplastics. 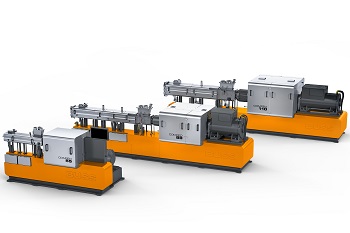 The key to success

The highly effective and simultaneously gentle mixing action is the result of the particular way the Buss Kneader works. Firstly, its screw helix has two to four gaps per turn, which give rise to the characteristic flights which mesh with stationary kneading pins mounted in the barrel. Secondly, the screw shaft simultaneously rotates and axially oscillates, performing a complete forward and backward stroke from its starting position per revolution.

The shear required for melting and dispersion arises in the shear gap between screw flights and kneading pins. Based on the working principle, the shear rate is independent of machine size and is directly proportional to the rotational speed of the screw shaft. This explains a further advantage of the Buss Kneader technology, the straightforward scalability from lab to production scale. 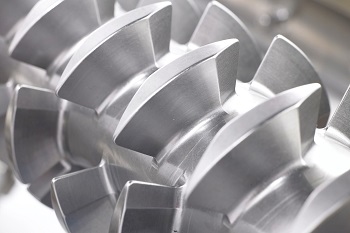 For many users who handle a wide range of products, the Buss Kneader is the system of choice thanks to its all-round capabilities. It has also become a technology leader in specific niche areas. For instance, manufacturers of insulation for medium to ultra-high voltage cables by reactive extrusion appreciate its precise temperature control. In semi-conductive compounds, the gentle dispersion of highly structured additives is key, while in other thermoplastics the decisive factor is compounding within tight processing windows.

Applications in medical technology include the production of compounds for handling liquids and for sterile packaging for medicines, of compounds with antibacterial and antiviral properties and of adhesives, for example for dressings. The Buss Kneader's moderate shear rates combined with very good mixing characteristics mean very small quantities of additives can be uniformly incorporated.

In applications involving temperature- and/or shear-sensitive ingredients, for example in compounds based on PBT or high-temperature-resistant polyamide, in thermosets which have to be compounded below crosslinking temperature, or in natural fiber-reinforced materials, the moderate shear rates mean compounding can be carried out within tight operational windows. Applications range from electronic components via under-hood parts to weight-optimized aircraft or vehicle parts.
Tag: Compounding, Continuous compounding
Share:
Back to previous page